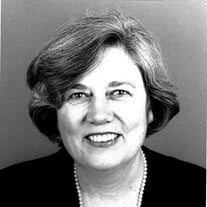 Christine Lokhammer passed away on June 10th, 2017, at her home in Hopewell, New Jersey. Chris was born in Norway on December 18, 1948. She was predeceased by her loving husband Peter Lokhammer, to whom she was married for a wonderful 35 years. Chris is survived by her four sisters Liz Imperatrice, Solfrid Hjelmas, Gail Morano, and Irene Garofala and her brother in law Joseph Garafola, along with her sister in law and brother in law Beth and Bob Luginbuhl. Her family also includes numerous nieces and nephews, godchildren and friends whom she loved dearly. Chris's unparalleled banking career began in 1969 with Princeton Bank & Trust, and she worked in the Princeton community for decades until her retirement as a Senior Vice President and Team Director at PNC Wealth Management in December 2016. Chris inspired, mentored, and served as a role model for countless colleagues during her tenure as the most well known banker in Princeton. Chris also worked tirelessly on nonprofit boards and committees to support causes and people whom she cared about. Her many awards and recognitions demonstrate the strong commitment Chris had to her community and the amazing friends she made along the way. Calling hours will be held on Tuesday, June 13, 2017 from 2-4pm and 6-8pm at Hopewell Memorial Home, 71 E. Prospect St., Hopewell, NJ 08525. On Wednesday, June 14, 2017, a private burial will take place at Princeton Cemetery followed by an 11 am memorial service for ALL FRIENDS at Nassau Presbyterian Church, 61 Nassau Street, Princeton, NJ 08540. Chris has requested that in lieu of flowers, contributions be made to either of two charitable funds established in her name at the Princeton Area Community Foundation, 15 Princess Road, Lawrenceville, NJ 08648. They are: "The Chris Lokhammer Fund for the benefit of the Fund For Women and Girls" and "The Chris Lokhammer Internship Fund for the Stony Brook Millstone Watershed." Services are under the direction of Hopewell Memorial Home, 71 East Prospect Street, Hopewell, NJ 08525 - 609-466-3632

Christine Lokhammer passed away on June 10th, 2017, at her home in Hopewell, New Jersey. Chris was born in Norway on December 18, 1948. She was predeceased by her loving husband Peter Lokhammer, to whom she was married for a wonderful 35 years.... View Obituary & Service Information

The family of Christine Lokhammer created this Life Tributes page to make it easy to share your memories.

Send flowers to the Lokhammer family.