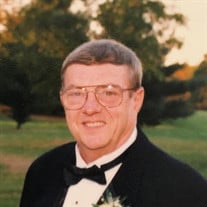 James Dobbing Simmons of Hopewell Township, NJ, peacefully passed away on April 29, 2018. Jim was 83 years old. Born in Easton, PA, Jim lived in Washington, NJ and Bryn Mawr, PA before his family settled in Lawrenceville, NJ when he was a young boy. Jim was predeceased by his parents, Cecil and Elizabeth (Dobbing) Simmons, and his brother, Robert Simmons. He is survived by his wife of 57 years, Carol (Ludwig) Simmons; sons and daughters-in-law, Scott and Bonnie Simmons of Belle Mead, NJ and Mark and Melissa Simmons of Newtown, PA; grandsons, Brandon, Jared and Kyle Simmons of Belle Mead and Robert and Kevin Simmons of Newtown as well as nephews and nieces. Jim graduated from Princeton High School in 1952 and joined the Navy soon after. Jim served in the Navy for five years before being honorably discharged. Jim was immediately drafted by the Army, serving 1957-1959, where he was also a member of the Military Police. After being honorably discharged by the Army, he went to work at HD Lee in Trenton, NJ, where he soon met his future wife. They were engaged 9 months later and married in 1960. Jim began working for United Parcel Service (UPS) in October 1960, where he worked as a driver and shop steward for 30 years. During this time, Jim also worked as a part-time police officer for Lawrence Township Police in the early 60’s where he resided after marriage and served as President of the New Jersey Rural Police Association during this time. Jim and his wife moved to Hopewell, NJ in 1964 before moving to Hopewell Township, NJ in 1965, where they raised their family. Jim joined the Hopewell Township Police Department as a part-time officer in 1965 where he stayed for ten years, while still working at UPS. Jim enjoyed many family vacations in Indian Lake and Lake George, both located in his beloved Adirondacks of New York. Jim was a dog lover, particularly of Black Labs, and he enjoyed trapshooting with his sons. Calling hours will be held at the Hopewell Memorial Home, 71 East Prospect Street in Hopewell, from 6:00 to 8:00 PM on Wednesday, May 2, 2018. Interment will be private. In lieu of flowers, contributions may be made in James’ name to the American Heart Association, PO Box 3049 Syracuse, NY 13220-3049 or https://www.heart.org/idc/groups/heart-public/@wcm/@tcs/documents/downloadable/ucm_430364.pdf Services under the supervision of Hopewell Memorial Home and Cremation Services located in Hopewell Borough, NJ

James Dobbing Simmons of Hopewell Township, NJ, peacefully passed away on April 29, 2018. Jim was 83 years old. Born in Easton, PA, Jim lived in Washington, NJ and Bryn Mawr, PA before his family settled in Lawrenceville, NJ when he was a young... View Obituary & Service Information

The family of Mr. James Dobbing Simmons created this Life Tributes page to make it easy to share your memories.

Send flowers to the Simmons family.