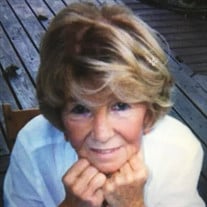 Marcia Devlin Ziemba passed unexpectedly into the eternal care of the Lord during her sleep on December 29, 2018, at the age of 83. Marcia was born on May 23, 1935, in Duluth, Minnesota, and graduated from Duluth Central High School in June 1953. Shortly thereafter, she met and married James A. Devlin, Sr., in Duluth, MN. The couple then moved to Hopewell, NJ, where they raised their five sons. Marcia was a proud homemaker for a number of years until beginning and advancing her career as a telephone center director in the market research industry at Response Analysis Corporation and Total Research Corporation, both in Princeton, NJ. After retirement, “Miss Marcia” served as a cafeteria assistant at the Grey Nun Academy in Yardley, PA, whose students and staff she loved and cherished, a “second family” who never failed to bring her feelings of joy, happiness, and serenity on a daily basis. Marcia married her second husband, Mark Ziemba of Flemington, NJ, in 1979 and moved to Yardley, PA, where she resided until her death. Marcia was active in local politics, serving on the campaign committees of several local officials. She loved all animals but was especially fond of dogs, of which she had many faithful, loving companions during her lifetime. Marcia’s passion, however, was enjoying the love and company of her family, particularly her many grandchildren and great grandchildren. Marcia is predeceased by her parents, Louis and Leona (Kucharski) Larson; a brother, Richard Larson; and second husband, Mark Ziemba. She is survived by her first husband, James A. Devlin, Sr. (Mary Ann) of Bethlehem, PA; and five sons, James A. Devlin, Jr (Peggi Ann Anderson) of West Trenton, NJ; Jeffrey M. Devlin (Stacy) of Hamilton, NJ; Brian P. Devlin (Linda) of Wirtz, VA; Daniel T. Devlin of Hopewell, NJ; and Christopher S. Devlin (Candy) of Morrisville, PA. Marcia is also survived by her twin sister, Maryann Setter of Duluth, MN; siblings Rita Rivers (John) of Duluth, MN; Jean McLaughlin of Ewing, NJ; Jim Larson (Mavis) of Apple Valley, MN; Robert (Bo) Larson of Duluth, MN; and Debbie Hughes (John) of Richfield, MN. Also surviving Marcia are ten grandchildren, four great-grandchildren, and numerous nieces and nephews. She also leaves behind her beloved dog, Sadie. Visitors are welcome to call on Tuesday, January 8, from 6:00 to 8:00 p.m., at Hopewell Memorial Home, 71 East Prospect Street, Hopewell, NJ. A Mass of Christian Burial will be celebrated by Monsignor Michael Walsh on Wednesday, January 9, at 10:30 a.m., at St. Alphonsus Roman Catholic Church, 54 East Prospect Street, Hopewell, NJ. Interment will immediately follow at Highland Cemetery, North Greenwood Avenue, Hopewell, N.J. The family requests that in lieu of flowers, donations be made to support the establishment of a permanent annual scholarship fund in “Miss Marcia’s” name to benefit a deserving student of Grey Nun Academy. Please make donations payable to “Grey Nun Academy”, 1750 Quarry Road, Yardley, PA 19067. Clearly note that your donation is made in memory of Marcia Devlin Ziemba in the memo. Arrangements are being made under the direction of Christopher Merlino, Funeral Director & Manager, Hopewell Memorial Home, Hopewell, NJ www.hopewellmemorial.com.

Marcia Devlin Ziemba passed unexpectedly into the eternal care of the Lord during her sleep on December 29, 2018, at the age of 83. Marcia was born on May 23, 1935, in Duluth, Minnesota, and graduated from Duluth Central High School in June... View Obituary & Service Information

The family of Marcia Devlin Ziemba created this Life Tributes page to make it easy to share your memories.

Send flowers to the Ziemba family.