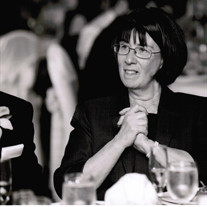 Mary E. Bullard Pennington, NJ Mary Elizabeth Bullard of Pennington, NJ, passed away peacefully at home on January 5, 2015. She was 60. Mary was born in Springfield, Massachusetts on July 17, 1954. Mary was one of eight children of Ernest and Margaret Gamache. She graduated from Rider College in 1975. In 1977, Mary wed Eldred Bullard of South Amboy, NJ and together they raised two children. She enjoyed an active career in accounting in addition to being a devoted mother and spouse. Family moves had taken her from New Jersey back to her Massachusetts roots but in 1985 she was brought back to Jersey and moved to Caldwell, and then settled in Pennington in 1989. Employed as Assistant Vice President of Finance and Administration at New Jersey Business and Industry Association, she recently retired. Mary enjoyed spending time with her family, especially her three grandchildren who brought her hours of joy playing and reading together, those times in turn brought cherished memories whenever they were not together. An avid reader, many books have flowed through her hands. Mary enjoyed baseball and football, she tolerated few interruptions whenever the Yankees and Giants played, and she delighted in sharing those passions with others. She opened her heart to everyone she met and she will be greatly missed by all who associated with her. Mary was married for 37 years to her loving husband, both of them enjoying years of camping along with sharing Maine vacations with family and friends. Mary is survived by her husband, two children and their spouses Kevin and Lisa Bullard of Lawrenceville and Julia and Joseph Paul of Hopewell, as well as her three grandchildren. She is also survived by her mother, Margaret Gamache, one brother and six sisters, numerous nieces and nephews and caring and close friends. A Memorial Mass will be celebrated at 11 a.m. on Saturday, January 17, 2015 in St. Alphonsus Church, 54 East Prospect Street (Route 569) Hopewell, NJ 08525. Friends may call at the Church from 10-11 a.m. In lieu of flowers, memorial contributions may be made to: Friends of the Hopewell Township Library, 245 Pennington-Titusville Road, Pennington, NJ 08534. Arrangements are under the direction of the Hopewell Memorial Home. www.hopewellmh.com

Mary E. Bullard Pennington, NJ Mary Elizabeth Bullard of Pennington, NJ, passed away peacefully at home on January 5, 2015. She was 60. Mary was born in Springfield, Massachusetts on July 17, 1954. Mary was one of eight children of Ernest... View Obituary & Service Information

The family of Mary E Bullard created this Life Tributes page to make it easy to share your memories.

Send flowers to the Bullard family.