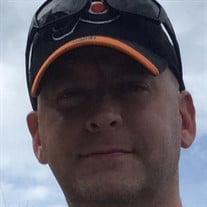 Paul Edward Brown, 40, of Pennington, NJ passed away unexpectedly on Sunday, November 5, 2017. Paul was a loving husband to Melissa Brown and proud father to Aidan, Madeline, and Rocky Carlos the Beagle. He was a dedicated son to Richard Brown and the late Mary Brown of Brick, NJ. Paul was the son-in-law and “son they never had”to Richard and Lucy Bogda of Ewing, NJ as well as a devoted brother/brother-in-law to Richard Brown of Belleville, NJ,Matthew and Debbie Brown of Brick, NJ, Joseph Brown and Adrienne Hew of Hawaii, Maria and Ken Cavanaugh of West Chester, PA, and Michele and Bruce Downie of Hopewell, NJ. Always the fun uncle, he will be greatly missed by Lauren & Collin Cavanaugh, Elizabeth & Ian Downie, Ryan & Jake Brown, and Daisy & Willow Brown. Paul was a proud member of the New Jersey State Police, Troop C, Bordentown Station and the Pipes and Drums of the Blue & Gold. Paul enjoyed a good cup of coffee, being the family barista, summers fishing and swimming at the Colonial Sportsmen’s Club, attending heavy metal concerts, playing the drums and taking trips to Ireland, Lake George, Long Beach Island and warm sunny resorts with his family. In addition to his family, Paul cherished time spent with his many friends. He will be greatly missed by his chosen Princeton Farms family, his childhood friends and those friends made during his 10 years as a New Jersey State Trooper. Cremation will be private. Calling hours will be Monday, November 13, 2017 at the Hopewell Memorial Home at 71 East Prospect Street, Hopewell, NJ 08525 from 2-4 p.m. and 6-8 p.m. A celebration of Paul’s life will be held on Tuesday, November 14, 2017 at Pennington Fire Hall at 120 Broemel Place, Pennington, NJ 08534 at 10 a.m. Memorial contributions for the children may be sent to: Aidan and Maddie Brown, c/o Michele Downie, P.O. Box 121, Hopewell, NJ 08525. No flowers please.

Paul Edward Brown, 40, of Pennington, NJ passed away unexpectedly on Sunday, November 5, 2017. Paul was a loving husband to Melissa Brown and proud father to Aidan, Madeline, and Rocky Carlos the Beagle. He was a dedicated son to Richard Brown... View Obituary & Service Information

The family of Paul Edward Brown created this Life Tributes page to make it easy to share your memories.

Send flowers to the Brown family.