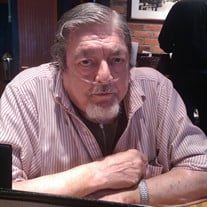 Roger Walker Amidon Jr, of Hopewell NJ, died May 13th, 2016. Roger was 73. He was the son of Roger and Laura (John) Amidon, of Verona NJ, and was the loving husband of Nancy, his wife of more than 37 years. Roger died at the University Medical Center of Princeton in Plainsboro, after a long battle with COPD. He is survived by Nancy, his two sons David and Roger, his daughter-in-law Elizabeth and granddaughter Pearl. He also leaves his four siblings, his brothers William and Douglas Amidon, and his loving sisters Kathryn Coffey and Lesley Sheehy, as well as many nieces, nephews, grandnieces and grandnephews. Roger, an electronics engineer and computer programmer, began his career by creating innovative software and hardware for the developing personal computer industry, from its earliest “hobbyist” days in the 1970’s and, one way or another, for most of his life. Both an innovator and entrepreneur he helped found several early personal computer companies. Roger will be remembered for his contributions to the first multiplexing LCD display, the first personal computer software development tools, the TPM operating system, and Zapple, a diagnostic tool for the Z-80 chip that worked at the machine level. In 1976, Roger was a founding member of the Trenton Computer Festival, one of the very first gatherings of computer enthusiasts in the country, perhaps the world. For both hardware and software, computer geeks and hobbyists came from great distances and descend onto the Trenton State College campus (now The College of New Jersey). The idea was to draw people together and provide an opportunity for engineers and developers to exchange and learn about the new ideas and developments, buy or sell the latest hardware and software or find a used piece of equipment at a pretty good price. It was a great success. Fairs like TCF began popping up across the country. TCF has expanded, brought in new technologies, and been an annual event for over 40 years. As the chief engineer of Rising Star industries, a fierce competitor to Microsoft in the early days of home computing, he shepherded the development of the Epson QX-10 personal home computer, providing a true WYSIWYG environment for the user and introducing the concept of integrated office software that predated Microsoft’s Office Suite. Later he would go on to create his own business, the DX Computer Company and got caught up in the booming game industry. He was the primary programmer on many games for the Game Boy entertainment system including, “Turn and Burn”, “Home Alone 2”, and the first handheld “Star Trek: The Next Generation” game. Roger was also a well-known amateur radio enthusiast; starting from a very young age. He held the call letters K2SMN for 60 years, a long-time ARRL member, and conducted the East Coast VHF Society’s Sunday morning net for more than 20 years. His eclectic interests included the music of the Beatles, science fiction movies, and adventure games such as the Legend of Zelda and Dragon Warrior. He was a storyteller and a dreamer, who loved his wife, children, and grandchild immensely. He was a determined force of nature, generous, and will be missed by those who knew and loved him. In lieu of flowers, donations to the ARRL Historic Preservation fund, at www.aarl.org/memorial-gifts (telephone 860-594-0397), will help provide a Silent Key memorial honoring Roger. Services are being held by Hopewell Memorial Home & Cremation Services located at 71 East Prospect Street, Hopewell NJ 08525 www.HopewellMemorial.com

Roger Walker Amidon Jr, of Hopewell NJ, died May 13th, 2016. Roger was 73. He was the son of Roger and Laura (John) Amidon, of Verona NJ, and was the loving husband of Nancy, his wife of more than 37 years. Roger died at the University Medical... View Obituary & Service Information

The family of Mr. Roger Walker Amidon, Jr. created this Life Tributes page to make it easy to share your memories.

Send flowers to the Amidon family.